We use cookies to help us improve this website. We don't track or gather personal information. To find out more about how we use them, read our cookie page.

Coronavirus: latest updates to services
Local information on coronavirus including service changes, business support and how to get help.
Read More 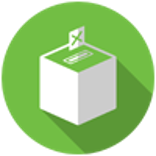 DECLARATION OF RESULT OF POLL

I, Jim Burness, being the Deputy (Acting) Returning Officer at the above election, do hereby give notice that the number of votes recorded for each Candidate at the said election is as follows:

* If elected the word 'Elected' appears against the number of votes.

And I do hereby declare that Joy Inboden Morrissey is duly elected.